Peak Sun Hours (PSH): What does it mean and how to estimate it?

When I started learning about solar power systems, I came across this term frequently. Sometimes it is called “(daily) peak sun hours” (PSH), other times it is reported as “sun hours”. You could also find a more academic expression like “Daily Equivalent Sun Hours” (ESH). All these terms are the same and used to indicate the amount of energy per day that reaches a certain location on the earth’s surface from the sun. Knowing the peak sun hours is useful because they simplify calculations when planning a solar-powered system.

Before I give you the actual definition, let’s have a very quick look at some basic notions of solar energy that will help us to better understand the concept of peak sun hours.

What is the difference between energy and power?

Energy is defined as the ability to do work and it’s measured in joule (J) in the international system of units (SI). For electrical energy, it’s most conveniently expressed as watt-hours (W.h). In the SI, some prefixes could be added to the unit names to produce multiples and submultiples of the original unit. So you can find energy units in forms of kilowatt-hours (kW.h) or megawatt-hours (MW.h) where:

Power is the rate at which energy is supplied. In other words, it is the amount of energy transferred or converted per unit time. The unit of power in SI is watts (W).

What type of energy we do receive from the sun?

The type of energy that we receive from the sunlight is called “radiation” and it’s composed of particles called “photons”. Each photon carries a fixed amount of energy. That means the energy from the sun is composed of groups of radiation and each radiation carries different amounts of energy, which is called solar spectrum. This categorization is important because the different technologies we use for collecting energy from the sun make use of different parts of the solar spectrum.

Solar radiation that reaches the Earth’s surface can be divided into two types:

Another term you should know is “solar irradiance”. It refers to the solar radiation actually reaching a surface. In other words, it’s the power received per unit area from the sun.

Also, “insolation” is a measure of the solar irradiance received on a location over a specified period of time.

How much energy do we receive from the sun? 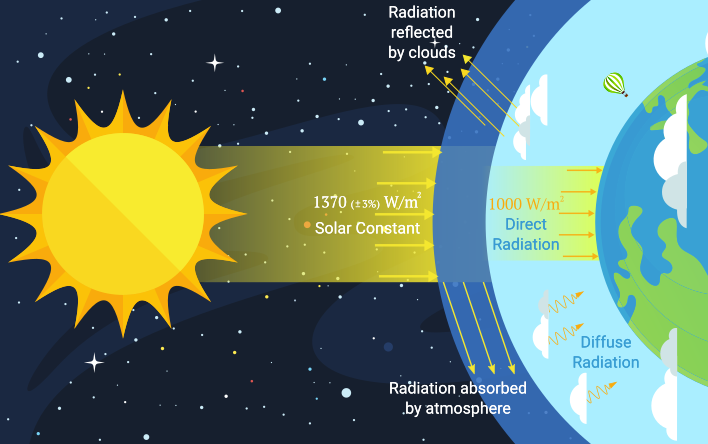 Solar energy reaches the edge of the Earth’s atmosphere at a constant rate of about 1370 watts per square metre (W/m2): this is called the ‘solar constant’. Our atmosphere absorbs and reflects part of it, so the maximum amount of power received by Earth’s surface (when the sun is directly overhead on a sunny day) is about 1000 W/m2 (1 kW/m2). This number is also known as “one sun” in technical terms of the PV community and it’s also used in a test condition known as STC to rate solar panels performance.

Some factors that affect the amount of solar power that we receive on a certain location on earth are the area’s latitude, cloudy periods, humidity and atmospheric clarity (smoke, smog and dust).

What is the definition of peak sun hours? 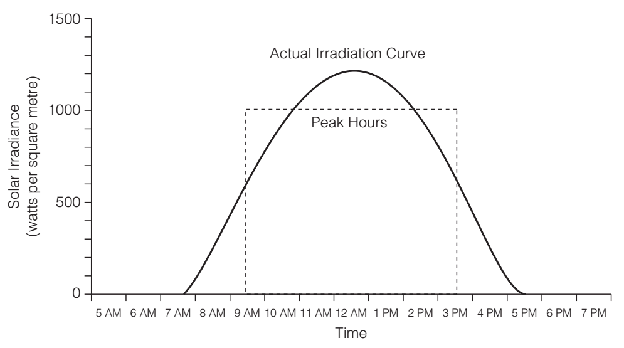 Solar radiation on a flat surface in the Equatorial regions. [src]

From the figure, you can see that the actual solar power received during a day varies, but the average daily solar insolation (irradiance) and peak sun hours are numerically identical.

For example, with four peak sun hours in a certain location, we will receive the same amount of energy as if the sun shines for 4 hours with the intensity of 1 kW/m2. In other words, we will receive 4 kW/m2 of power on the site.

How to find the peak sun hours for a certain location?

Meteorological stations all over the world keep records of monthly solar insolation. These data are reported as kW.h/m2/day or PSH (peak sun hours) in so called “insolation maps”. 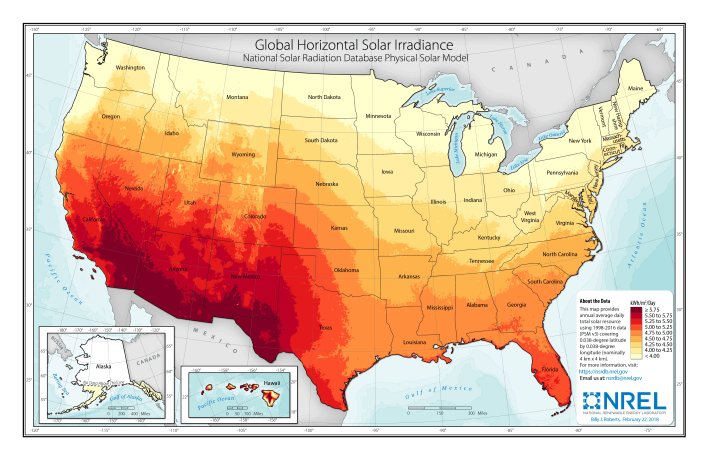 The two good sources that you can use to find the peak sun hours for your location are:

The peak sun hours varies day by day for each location on earth, which makes it difficult to predict. However, we can have a good estimation of monthly and annual mean daily insolation to help us plan a solar power system.

Lastly, in the mounting phase of solar panels, or other solar collectors, we have to consider the optimum angle. A surface that forms a 90 deg angle with the sun beams will receive more power.