What are the environmental impacts of solar energy?

If you are concerned about impacts of human activities on climate change and the environment in general, as much as I am, it means you want to be informed about the playing role of our technologies in this game, so that you can act out consequently by making more eco-friendly choices.

The main goal of using solar photovoltaic (PV) systems and concentrating solar thermal plants (CSP) is to generate electricity without any considerable effect on the environment. So, we have to identify different impact factors in order to reduce them by adopting adequate regulations and innovative techniques.

The environmental impacts of a solar system could be mainly divided into 3 phases:

I put a figure below from a research article conducted by Macquarie University, Australia, about the environmental impacts of solar energy systems to show you which data are chosen as input and which data are calculated as output for LCA analysis. 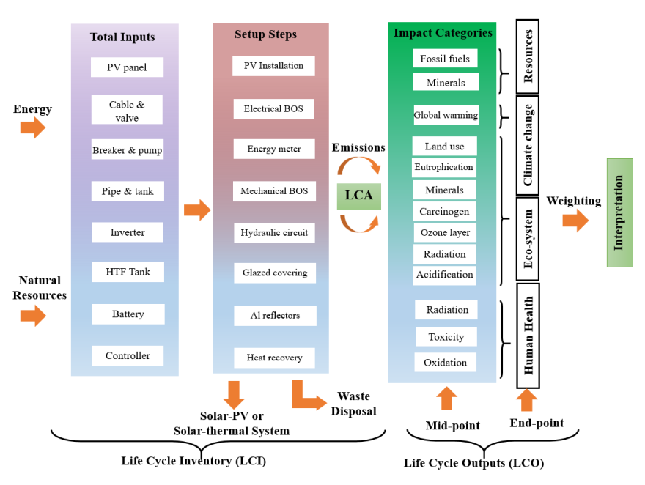 The system boundary of the life cycle assessment. [src]

There are many indicators that are used to judge the different ecological aspects of an LCA analysis. In this article, I will give you the two most interesting ones: EPBT and CO2,PBT.

Energy Payback Time (EPBT), is the time required to generate as much energy as is invested over the lifetime of the system (production, installation, maintenance, and disposal).

To give you an idea, rooftop PV systems, depending on the type of solar panels, have EPBT between 1 to 4 years. It means if they have 30 years of system life, they will generate 87% – 97% of clean energy.

In the figure, you can see the energy payback time of rooftop PV systems, with different solar panel technology. 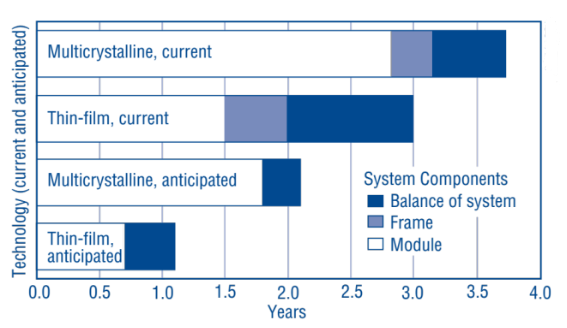 Assuming a system life of 30 years, PV systems will provide a net gain of 26 to 29 years of pollution-free and greenhouse-gas-free electrical generation.

CO2 Payback Time (CO2,PBT), is the time required by the system to make up for the amount of carbon dioxide emission produced over its lifetime.

The results of the LCA analysis show that solar-thermal systems have greater environmental impacts compare to solar PV systems as you can see in the figure below. 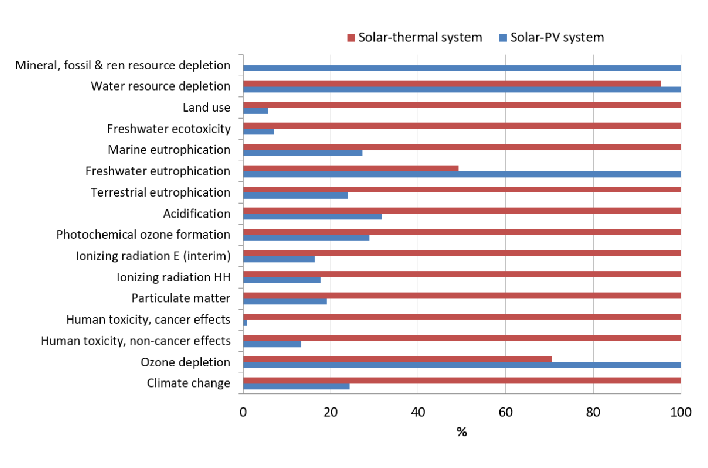 Comparison of environmental impacts from the solar PV and solar-thermal system. [src]

Now let’s have a brief look at some of the environmental impact categories: 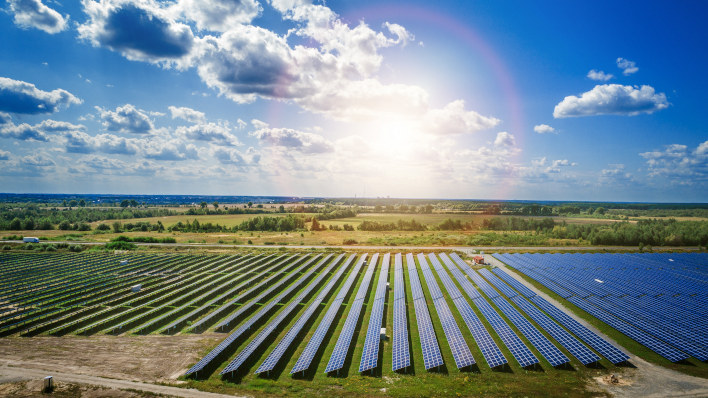 The visual impact depends on the system type, size, and location. The visual contrast (form, line, color, and texture) created by the system during its operation with nearby areas could be strong, but it’s also subjective and not measurable.

The visual changes could be reduced by paying attention to the architecture aspect and common visual sense. In buildings, during the construction phase, solar modules can be used as a cladding material. Large scale solar plants need proper sitting and design.

This is one of the most important factors and could be used as a proxy for other impacts. The scale of the system and its location will determine how much impact it has on the local ecosystem.

There is no single, generally accepted methodology for quantifying land-use impacts. But at least three general categories are considered for evaluation:

Clearing land for construction and the placement of the power plant may have long-term effects on the habitats of native plants and animals. Also, landscape modification in a desertic area could lead to soil erosion and increasing of dust loads that will affect negatively the solar power generation itself.

Research on the appropriate use of land by solar energy systems is still ongoing, such as the one conducted by Lancaster University and the Centre for Ecology & Hydrology, aims to manage the land used by giving it dual scope both for producing electricity and farming. read the news article 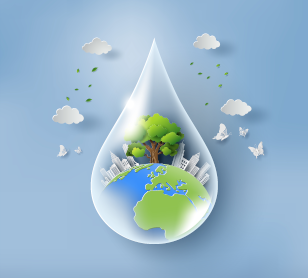 Water withdrawal depends on the type of system. It could impact the natural resources of water and change the habitat of wildlife.

In PV solar systems the water is used for cleaning solar panels during their operational life. Solar thermal plants could need more water both for cleaning and the cooling system.

Wet-cooled solar plants consume about the same amount of water as a coal-fired or nuclear powerplant (500 to 800 gal/MWh).

The water usage is more intense in the regions that require water for dust control, like the southwestern US. 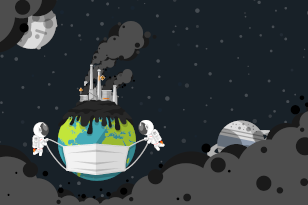 The hazardous materials used in solar facility construction are almost the same as any other similar industry. The proper management and handling of construction-related wastes will help to reduce environmental contamination risk.

As for PV systems, there are some toxic substances, such as hydrochloric acid, involved in the production phase of solar panels that could put workers’health and the environment in danger, which needs to be addressed and managed properly.

Also, different types of solar panels contain different amounts of toxic materials that could be accidentally released in the case of an emergency like a fire.

The major problem is at the end-of-life cycle of panels. These toxics materials (e.g. gallium arsenide, cadmium-telluride) need to be removed carefully to prevent soil and water contamination. 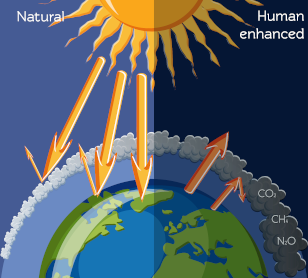 As you know, the greenhouse effect is a natural process that warms the Earth’s surface.

According to many scientists, human activities are responsible for overloading atmosphere with greenhouse gases, mostly carbon dioxide (CO2), that cause global warming and lead to drastic climate changes.

If you are curious to know the impact of your energy use on the environment, visit the US Environmental Protection Agency website.

Even though solar energy systems emit no pollution and do not produce any greenhouse gases during their operational life, there are still CO2 emissions associated with other stages of solar system life-cycle. The carbon footprint depends on the technology, the size, and the type of the system. But still, as you can see in the figure below, solar systems have a very low CO2 emission compared to other traditional sources of energy. 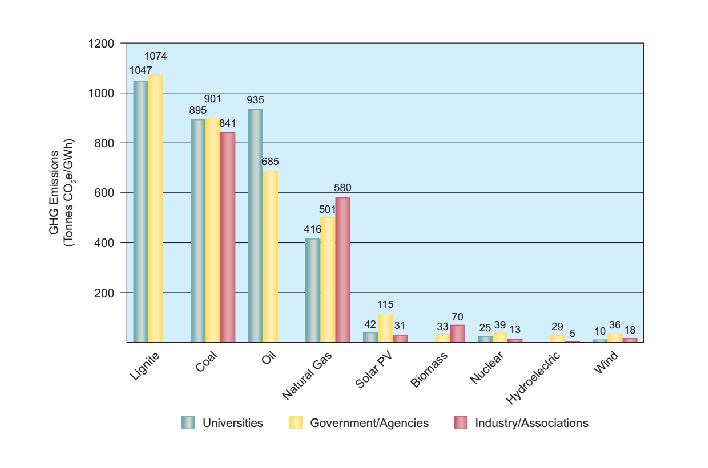 The sun is an infinite source of energy, and solar energy systems are one of the most environmentally friendly options for producing electricity.

Their potential negative impacts on the environment depend on the size, type, and location of these systems. Also, studies have shown that solar technology is much preferable to traditional forms of power generation considering environmental impacts.

Some of the beneficial aspects in short:

Obviously, it is possible to reduce their harmful impacts by adopting the proper measurement such as: