How much power do solar panels generate in winter?

When I first became interested in solar power systems, one of my questions was about their seasonal reliability and performance. Through my research, I found the answer is not very straight forward and needs different consideration and mainly depends on your geographical location.

To start answering this question, we need to know how solar power systems work and the factors that affect their performance. So, let’s clarify them briefly.

How does the solar power system work?

PV power systems are the ones we are interested in here. They use PV modules (solar panels) to produce electricity. The elementary building blocks of a PV module are called “solar cells” and are made from a semiconductor material, mostly silicon. Their working principle is based on “photovoltaic effect”, which generates voltage at the junction of solar cells when exposed to sunlight. 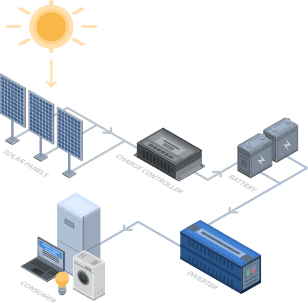 The electricity produced by solar panels then could be used to power other electrical devices and, depending on the project, the system contains different accessory components, such as inverter, batteries, charge controller, cables and breakers.

To optimize the amount of sunlight that reaches our solar panels, several factors should be taken into account when we plan a solar power system.

Shadowing is another factor that needs attention in the installation phase. Any element that could shade solar panels will reduce their power production.

In addition, there are other factors that affect solar panels efficiency because of their technological limits. The most general of which is temperature.

If you take a look at the specifications sheet of any solar panel on the market, you will find that manufacturers report a “temperature coefficient” value. This voice indicates the amount of power losses (%) for each ⁰C increase in temperature as the operational temperature of a solar panel deviates from 25⁰C (77⁰F).

Studies such as this passively cooled solar tile aim to find a way to reduce the impact of temperature on the solar panels’ performance.

For a better understanding of the solar panel rating system, read here.

How to calculate the generated power?

After these short explanations, we can now understand that the amount of power generated by a system directly depends on the amount of energy that solar panels receive from the sun on a period of time, which depends primarily on their geo-location.

The parameter that helps us to measure the amount of sunlight that we receive in a certain location on earth is called Peak Sun Hours (PSH) and can be found in so called insolation maps.

These maps report the average monthly or yearly values. So, you have to choose the value depending on the type of your system. For example, the project of an off-grid home system will be based on the average value of the months with less sunlight (normally winter), while for a grid-connected home, the yearly average value is considered.

The two good online sources to find PSH for your geo-location are:

Be aware to look for global horizontal irradiation data if your panels are installed parallel to the ground and are not tilted.

Each solar panel has a standard power rating determined through a laboratory test called STC and it’s reported in the specifications sheet, usually as Pmax and measured in watt (W). By multiplying PSH and the rated power of a solar panel, we will find an estimate of the daily power potentially generated by that panel in watt-hours (W.h).

What about the snow? Should we be concerned about it?

Not really. As we find the PSH for our location, this value is already an average of sun hours that we can get during a year or a month depending on our project needs. But if you want to know how snow affects a solar panel performance, look at the factors that I mentioned before.

A cloudy sky will drop our power production because of the shading factor. Also, if there is too much snow covering our solar panels, it will cause the same effect and sometimes could even stop the power generation completely. But, on the other hand, the cold in these months will make your panels work more efficiently. Also, as it melts, snow can actually help clean solar panels.

Basically, as long as heavy snowfall does not cause the weight problem for the mounting structure of the system, there is nothing to be worried about. But, if you have to clear the snow from the panels of your home solar power system, it’s better to contact professionals and don’t take the chance of damaging them because it is not covered under the warranty.

Technological improvements, decreasing costs and governments’ incentives over the last years make solar power a very good option for many homeowners around the world.

To evaluate the solar power potential for your home, I give you three free online resources:

[2] The Union of Concerned Scientists.